If the charge q is projected from point P in the direction of the current, it is deflected towards the wire (q is assumed to be positive). There must be a field which exerts a force on charge when it is projected, but not when it is kept at rest. This field is called Magnetic Field. 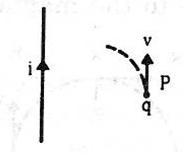 The branch of physics which deals with the magnetism due to electric current is called electromagnetism.

Some result of experiments for the magnetic field due to a straight long current-carrying wire is shown below. The wire is perpendicular to the plane of the paper. A ring of compass needles surrounds the wire. The orientation of the needles is shown when