The homoleptic complexes in which carbon monoxide (CO) acts as the ligand are called metal carbonyls.
For example: Ni(CO)4

Structure of some important metal carbonyls are: 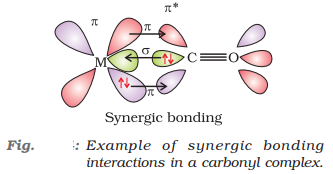 The stability of a complex in solution refers to the degree of association between the two-species involved in the state of equilibrium. The magnitude of the (stability or formation) equilibrium constant for the association, quantitatively expresses the stability.