The inertia of rotational motion is called the moment of inertia. It is denoted by L.
Moment of inertia is the property of an object by virtue of which it opposes any change in its state of rotation about an axis.

The moment of inertia of a body about a given axis is equal to the sum of the products of the masses of its constituent particles and the square of their respective distances from the axis of rotation. 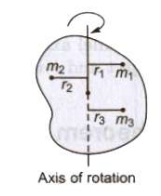 Moment of inertia of a body

Its unit is kg.m2 and its dimensional formula is [ML2].

The moment of inertia of a body depends upon

The Radius of Gyration

The root mean square distance of its constituent particles from the axis of rotation is called the radius of gyration of a body. It is denoted by K.

The moment of inertia of any object about any arbitrary axes is equal to the sum of moment of inertia about a parallel axis passing through the centre of mass and the product of mass of the body and the square of the perpendicular distance between the two axes. 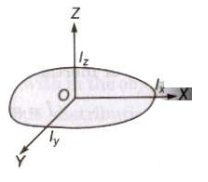 Mathematically IZ = IX + IY
where IX and IY are the moments of inertia of plane lamina about perpendicular axes X and Y respectively which lie in the plane lamina an intersect each other.