The means the algebraic sum of all the torques acting on the body about the axis of rotation must be zero.

The general conditions of equilibrium are

The centre of gravity of an extended body is that point where the total gravitational torque on the body is zero.

Take an irregularly shaped cardboard and a narrow tipped object like a pencil. You can locate by trial and error a point G on the cardboard where it can be balanced on the tip of the pencil. (The cardboard remains horizontal in this position.) This point of balance is the centre of gravity (CG) of the cardboard.

The tip of the pencil provides a vertically upward force due to which the cardboard is in mechanical equilibrium. 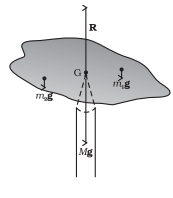 Balancing a cardboard on the tip of a pencil. The point of support, G, is the centre of gravity.

We may, therefore, define the CG of a body as that point where the total gravitational torque on the body is zero.