These defects are of two types:

Alkali halides like NaCl and KCl show this type of defect. When crystals of NaCl are heated in an atmosphere of sodium vapor, the sodium atoms are deposited on the surface of the crystal. The Cl– ions diffuse to the surface of the crystal and combine with Na atoms to give NaCl. This happens by loss of electron by sodium atoms to form Na+ ions. The released electrons diffuse into the crystal and occupy anionic sites (Fig.). 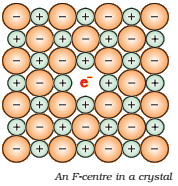 The anionic sites occupied by unpaired electrons are called F-centre. This F-centre is responsible for imparting color to the crystal. Like as:

Metal excess defect due to the presence of extra cations at interstitial sites:

Zinc oxide is white in color at room temperature. On heating it loses oxygen and turns yellow.

A typical example of this type is FeO which is mostly found with a composition of Fe0.95O. It may actually range from Fe0.93O to Fe0.96O.