Solids can be classified into three types on the basis of their conductivities.

These are the solids with conductivities in the intermediate range from 10–6 to 104 ohm–1m–1.

As we know that free electrons are responsible for the conduction of electricity in metals. Electrons are occupied in atomic orbital. The atomic orbital forms molecular orbital in metallic crystal. Molecular orbital are very closer in energy and known as bands. To be a conductor there must be some electrons in conduction band. But electrons are mainly occupied in valance band. On the basis of conductivity solid are classified in 3 types: Conductor, Semi-Conductor, and Insulator. 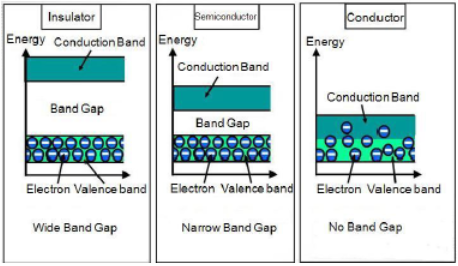 The electrical conductivity of semi-conductors can be increased by adding some electron rich impurity or electron deficient impurity. This is called doping.

For example: when silicon is doped with phosphorus, phosphorus also occupies some lattice site. The covalency of Si is 4 but that of P is 5. So, one electron per atom left unused and it delocalize from its location. This delocalizes electron help in increasing conductivity of semi-conductor.

For example: when silicon is doped with boron, boron also occupies some lattice site. The covalency of Si is 4 but that of B is 3. So, one of the positions of electron is left unused. This is called electron hole. The electron from neighboring atom moves to fill this hole but creates a new hole. This looks like movement of electron hole throughout the system. Electrons moves through theses hole under the influence of electric fields. In this way electrical conductivity increases.

Application of n-type and p-type semiconductors:

By the combination of n-type and p-type semiconductors many electronic devices are prepared.