A motion that repeats itself at regular intervals of time is called periodic motion.

Note that both the curved parts in Fig (c) are sections of a parabola given by Newton’s equation of motion with different values of u in each case. These are examples of periodic motion. 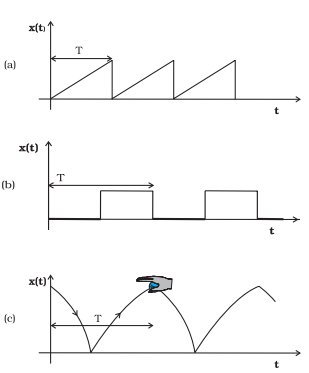 Fig. Examples of periodic motion. The period T is shown in each case.

If the body is given a small displacement from the position, a force comes into play which tries to bring the body back to the equilibrium point, giving rise to oscillations or vibrations.

For example: – A ball placed in a bowl will be in equilibrium at the bottom. If displaced a little from the point, it will perform oscillations in the bowl. Every oscillatory motion is periodic, but every periodic motion need not be oscillatory. Circular motion is a periodic motion, but it is not oscillatory.

There is no significant difference between oscillations and vibrations.

A motion that repeats itself at regular intervals of time is called periodic motion. The smallest interval of time after which the motion is repeated is called its period.

Let us denote the period by the symbol T.

Its SI unit is second.

The period of vibrations of a quartz crystal is expressed in units of microseconds (10-6 s) abbreviated as μs.

The reciprocal of T gives the number of repetitions that occur per unit time. This quantity is called the frequency of the periodic motion. It is represented by the symbol ν . The relation between v and T is

The unit of ν is thus s-1. It is called hertz (abbreviated as Hz). Thus,

An oscillating simple pendulum, the angle from the vertical as a function of time may be regarded as a displacement variable [see Fig.(b)]. in the context of position only. 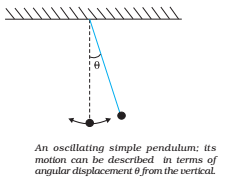 The displacement can be represented by a mathematical function of time. In case of periodic motion, this function is periodic in time.

is also a periodic function with the same period T. Taking,

Any periodic function can be expressed as a superposition of sine and cosine functions of different time periods with suitable coefficients.