In simple harmonic motion (SHM), the displacement x(t) of a particle from its equilibrium position is given by, 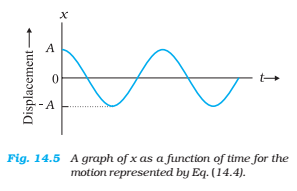 in which A is the amplitude of the displacement, the quantity (ωt + ϕ) is the phase of the motion, and ϕ is the phase constant.

The angular frequency ω is related to the period and frequency of the motion by,

The SI unit of angular frequency is radians per second.

To illustrate the significance of period T, sinusoidal function with two different periods are plotted in below graph.

Simple harmonic motion is the projection of uniform circular motion on a diameter of the circle in which the latter motion takes place.

The magnitude of velocity, v, with which the reference particle P is moving in a circle is related to its angular speed, ω as

where A is the radius of the circle describe by the particle P. its projection on the x-axis at any time t, as shown in above Fig. is 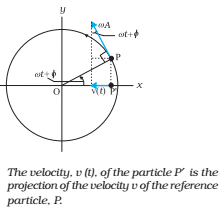 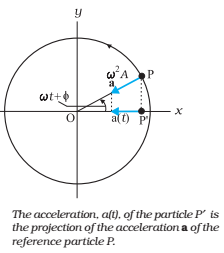 Eq. (5) expresses the acceleration of a particle executing SHM. It is shown that in SHM, the acceleration is proportional to the displacement and is always directed towards the mean position.

The inter-relationship between the displacement of a particle executing simple harmonic motion, its velocity and acceleration can be seen in below Fig. 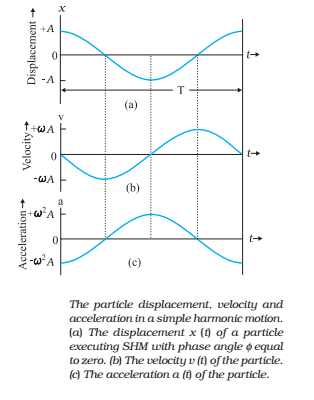