The force acting simple harmonic motion is proportional to the displacement and is always directed towards the centre of motion. 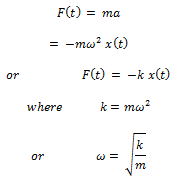 Simple harmonic motion is the motion executed by a particle subject to a force, which is proportional to the displacement of the particle and is directed towards the mean position.

The energy of a harmonic oscillator is partly kinetic and partly potential. When a body is displaced from its equilibrium position by doing work upon it, it acquires potential energy. When the body is released, it begins to move back with a velocity, thus acquiring kinetic energy.

At any instant, the displacement of a particle executing S.H.M. is given by

Kinetic Energy(K) of such a particle, which is defined as 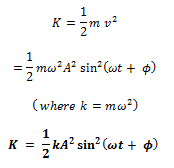 When the displacement of a particle from its equilibrium position is x, the restoring force acting on it is,

If we displace the particle further through a small distance dx, then work done against the restoring force is given by

At any displacement x, the total energy of a harmonic oscillatory is given by

The quantity within the square brackets above is unity and we have,

The total mechanical energy of a harmonic oscillator is thus independent of time as expected for motion under any conservative force. The time and displacement dependence of the potential and kinetic energies of a linear simple harmonic oscillator are shown in Fig. 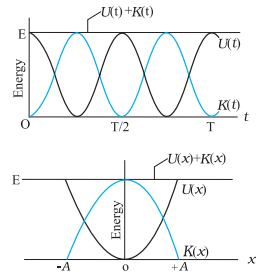 In the subsequent part of this section, we discuss the motion executed by some such systems 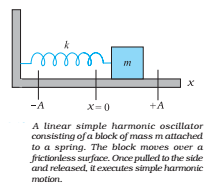