Physical Properties of Aldehydes and Ketones

Chemical Reaction of Aldehydes and ketones:

A nucleophile attacks the electrophilic carbon atom of the polar carbonyl group from a direction approximately perpendicular to the plane of sp2 hybridised orbitals of carbonyl carbon. 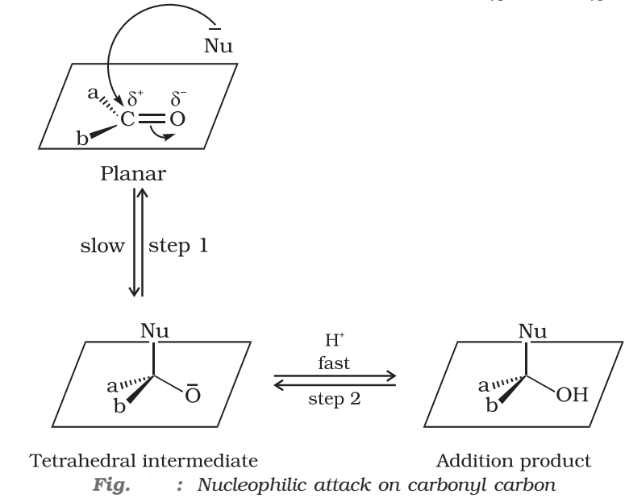 The hybridisation of carbon changes from sp2 to sp3 in this process, and a tetrahedral alkoxide intermediate is produced. This intermediate capture a proton from the reaction medium to give the electrically neutral product. The net result is the addition of Nu– and H+ across the carbon-oxygen double bond.

Aldehydes are generally more reactive than ketones in nucleophilic addition reactions due to steric and electronic reasons. Sterically, the presence of two relatively large substituents in ketones hinders the approach of nucleophile to carbonyl carbon than in aldehydes having only one such substituent. 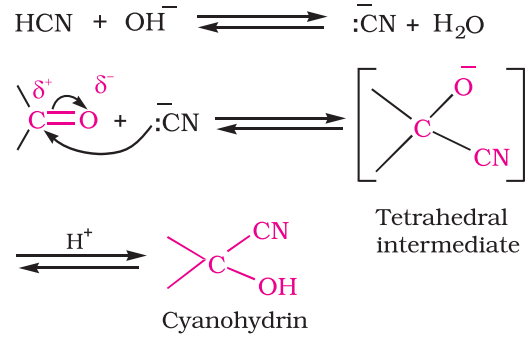 Addition of alcohols: Aldehydes on addition of monohydric alcohol in presente of dry HC1 forms hemiacetal which further on reacting with one more molecule of alcohol turns to and acetal.

Aldehydes and ketones are reduced to primary and secondary alcohols respectively by sodium borohydride (NaBH4) or lithium aluminium hydride (LiAlH4). 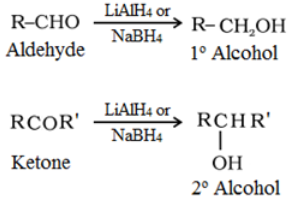 Oxidation of Aldehydes and Ketones:

Due to the presence of hydrogen at carbonyl carbon, aldehydes are easily oxidisable while ketones are difficult to oxidise.

Ketones are oxidized under drastic conditions i.e. with powerful oxidising agents like HNO3, K2Cr2O7/H2SO4 , KMnO4/H2SO4 at higher temperature to give a mixture of acids, each containing lesser number of carbon atoms than the parent ketones.

Test to Distinguish between Aldehydes and Ketones:

Aldehydes which do not have an α -hydrogen atom undergo self-oxidation and reduction (disproportionation) reaction on treatment with concentrated alkali to form alcohol and salt of acid.

Uses of aldehydes and ketones: