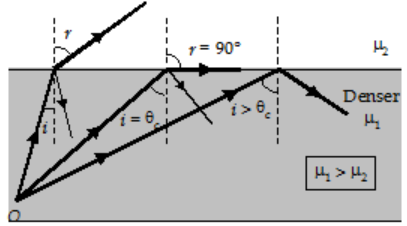 Images formed by TIR are much brighter than those formed by the mirrors (or lenses). Some loss of intensity always takes place, when light is reflected from a mirror (or refracted through a lens).

For the case of critical angle, we have

where μd is the refractive index of the denser medium w.r.t. the rarer medium. The lesser the value of μ, the greater is the critical angle θC.

Total internal reflection in nature and its technological applications

Similarly, in cold countries (near Polar Regions), the refractive index decreases with height. Due to TIR (fig. B), the image of a but appears hanging in the air. This is called looming.