Bond length is defined as the equilibrium distance between the nuclei of two bonded atoms in a molecule. 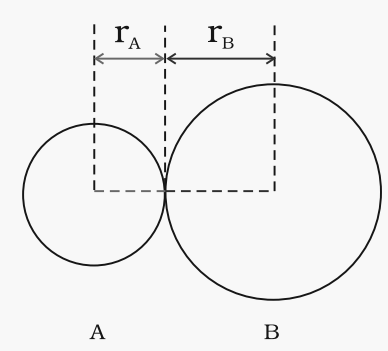 Fig. The bond length in a covalent molecule AB.

In a covalently bonded molecule having more than two atoms, the bonds form an angle with each other, which known as bond angle. In general, an increase in the size of central atom decreases the bond angle.

It is determined by X-rays diffraction method.

For example: H-O-H bond angle in water can be represented as under:

It is defined as the amount of energy required to break one mole of bonds of a particular type to separate them into gaseous atoms.

Greater the bond enthalpy, stronger is the bond. For e.g., the H-H bond enthalpy in hydrogen is 435.8 kJ mol-1.

In polyatomic molecules, the term mean or average bond enthalpy is used.

According to Lewis, in a covalent bond, the bond order is given by the number of bonds between two atoms in a molecule. For example,

Isoelectronic molecules and ions have identical bond orders. For example, F2 and O22- have bond order = 1.

With the increase in bond order, bond enthalpy increases and bond length decreases. For example,

According to the concept of resonance, whenever a single Lewis structure cannot describe a molecule accurately, a number of structures with similar energy, positions of nuclei, bonding and non-bonding pairs of electrons are taken as the canonical structures of the hybrid which describes the molecule accurately. Fig. Resonance in the O3 molecule
(structures I and II represent the two canonical forms while the structure III is the resonance hybrid)

When the atoms joined by covalent bond are the same like; H2, O2, Cl2, the shared pair of electrons is equally attracted by two atoms and thus the shared electron pair is equidistant to both of them.

Alternatively, we can say that it lies exactly in the centre of the bonding atoms. As a result, no poles are developed and the bond is called as non-polar covalent bond. The corresponding molecules are known as non-polar molecules.

The product of the magnitude of the charge and the distance between the charge of positive and negative charges.

It is a vector quantity and is represented by an arrow with its tail at the positive charge and head pointing towards a negative charge.

With the help of diploe moment, the degree of polarity of bonds can be expressed.

It is expressed in Debye units (D)

For example, the molecules with zero diploe moment will be linear or symmetrical. Those molecules which have unsymmetrical shapes will be either bent or angular.
(e.g., NH3 with μ = 1.47 D).