It is formed by the combination of two hydrogen atoms. Each hydrogen atom has one electron in 1s orbital, so, the electronic configuration of hydrogen molecule is

This indicates that two hydrogen atoms are bonded by a single covalent bond. Bond dissociation energy of hydrogen has been found = 438 kJ/mole. Bond length = 74 pm

No unpaired electron is present therefore, it is diamagnetic.

Each helium atom contains 2 electrons, thus in He2 molecule there would be 4 electrons.

The electrons will be accommodated in σ1s and σ*1s molecular orbitals.

He2 molecule is therefore unstable and does not exist. 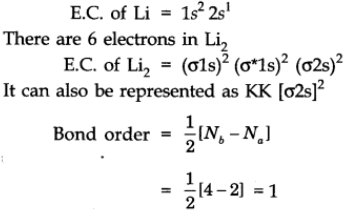 The orbital configuration of oxygen is

This means that sixteen electrons are to be filled in the molecular orbital of oxygen molecule (O2.

It may also be written as:

Nature: Paramagnetic due to the presence of two unpaired electrons.