About 75% of the solar energy reaching the earth is absorbed by the earth’s surface, which increases it’s temperature. The rest of the heat radiates back to the atmosphere. Some of the heat is trapped by the gases such as carbon dioxide, methane, ozone, CFCs (chlorofluorocarbon compounds) and Water vapour in the atmosphere. Thus, they add to the heating of the atmosphere causing Global warming.

This trapping of the sun’s heat near the earth’s surface and keeping it warm is called natural greenhouse effect. It maintains the temperature and makes the earth perfect for life.

75% of the solar energy reaching earth is absorbed by the earth surface and rest is radiated back to the atmosphere. These gases mentioned above trap the heat which result into global warming.

It is important to realize that these very gases are also responsible for the life on the earth as they trap the requisite amount of solar energy for the sustenance of life. The increase in the greenhouse gases is raising the temperature of the earth’s atmosphere which, if not checked, may eventually result in melting of polar ice caps and consequently may submerge the costal land mass.

When the pH of the rain water drops below 5.6, it is known as acid rain. Normal rain is slightly acidic due to dissolution of atmospheric carbon dioxide in water.

Oxides of nitrogen and sulphur released as a result of combustion of fossil fuels dissolve in water to form nitric acid and sulphuric acid. 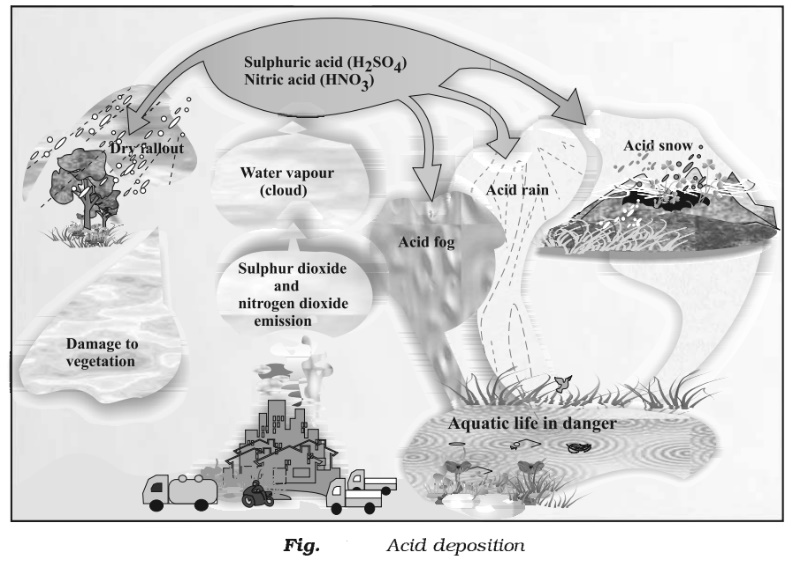 The gaseous pollutants come down to the earth in the form of acid rain.