A gas that follows Boyle’s law, Charle’s law, Avogadro law strictly, is called an ideal gas. Real gases follow these laws only under certain specific condition. When forces of interaction are practically negligible.

The above laws can be combined together in a single equation which is known as ideal gas equation.

where R is proportionality constant. On rearranging the equation, we obtain

If temperature, volume and pressure of a fixed amount of gas vary from T1, V1 and p1 to T2, V2 and p2 then we can write

This equation is also known as combined gas law.

Variation of the Ideal Gas Equation

Ideal gas equation can be rearranged as follows:

Replacing n by m/M, we get

where ptotal is the total pressure exerted by the mixture of gases and p1, p2, p3 etc. are partial pressures of gases.

Gases are generally collected over water and therefore are moist. Pressure of dry gas can be calculated by subtracting vapour pressure of water from the total pressure of the moist gas which contains water vapours also. Pressure exerted by saturated water vapour is called aqueous tension. 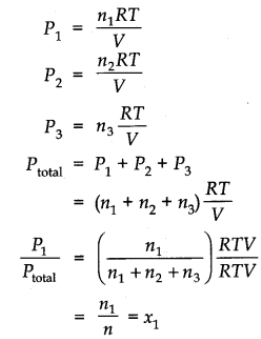 Similarly, for other two gases we can write

Thus, a general equation can be written as

where pi and xi are partial pressure and mole fraction of ith gas respectively.