Assumptions or postulates of the kinetic-molecular theory of gases are given below. These postulates are related to atoms and molecules which cannot be seen, hence it is said to provide a microscopic model of gases.

The important mathematical results from this theory are:

From the above postulates, the kinetic gas equation derived is

where, U = root mean square velocity

The Maxwell Boltzmann Distribution is a plot of fraction of molecules in the gas sample vs. the speed of the gas molecules. The distribution is shown below followed by the salient features of the graph. 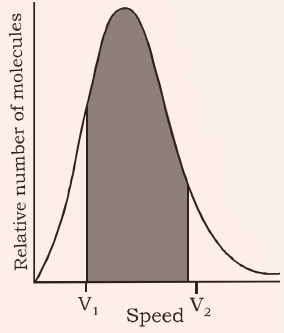 The graph shows that:

IMP: Always remember to take molecular mass in kg in the above relations.