The process of the removal of the harmful metabolic wastes from the body is called excretion. Excretory system of human beings includes: 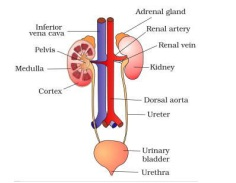 Renal artery brings in blood containing waste substances to the kidneys. Kidney filters blood. Urine produced in the kidneys passes through the ureters into the urinary bladder where it is stored until it is released through the urethra.

The function of Kidney:

It removes waste product from the blood i.e., urea which is produced in the liver.

Each kidney has a large number of filtration units called nephrons. The nephron is the structural and functional unit of Kidney.

Now, useful substances from the filtrate Like, glucose, amino acids etc. are reabsorbed by the capillaries surrounding the nephron into the blood.

Urea, extra water and salts are secreted into the tubule which open up into the collecting duct & then into the ureter.

The process of purifying blood by an artificial kidney. It is meant for Kidney failure patient. 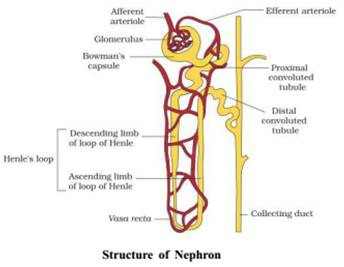