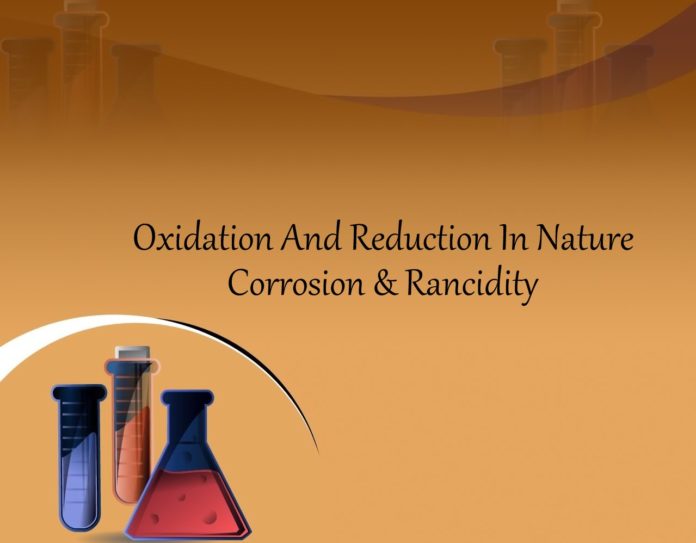 There are many natural phenomenon which based on chemical reactions. Here we describe two phenomenons based on oxidation and reduction reaction.

Corrosion is a natural process, which converts a refined metal to a more chemically-stable form. The chemically stable form may be oxide, hydroxide, or sulfide. Generally corrosion destruct the metal and reduce it’s life. Corrosion of aluminum is exceptional case. As when surface of aluminum utensil got corrosive, it prevent further corrosion.

Corrosion to iron is known as rusting. It mostly harmful and reduce life the iron. For rusting of iron air(O2) and presence of water is necessary .

Above reaction shows rusting of iron. Iron is oxidized by air in presence of moisture.

Rancidity is a very general natural phenomenon. It refers to the spoilage of a food in such a way that it becomes undesirable for consumption. When people say that a food has “gone bad”, what they’re usually talking about is rancidity. Usually, rancidity change the odors or flavors of a food. So that it becomes very unpleasant to eat.