There are numerous physical properties of elements such as melting and boiling points, heats of fusion and vaporization, energy of atomization, etc. which show periodic variations.

It is defined as the distance from the centre of the nucleus to the nucleus to the outermost shell containing the electrons. Depending upon whether an element is a non-metal or a metal, three different types of atomic radii are used. These are:

The effective distance from the centre of the nucleus of an ion upto which it has an influence on its electron cloud is called its ionic radius. A cation is smaller but the anion is larger than the parent atom. In case of isoelectronic species, the cation with greater positive charge has smaller radius but anion with greater negative charge has the larger radii.

The minimum amount of energy required to remove the electron from the outermost orbit of an isolated atom in the gaseous state is known as ionization energy.

Various factors with which IE vanes are:

When an electron is added to a neutral gaseous atom (X) to convert it into a negative ion, the enthalpy change accompanying the process is defined as the Electron Gain E n t h a l p y ( egH). Electron gain enthalpy provides a measure of the ease with which an atom adds an electron to form anion as represented by

Various factors with which electron gain enthalpy varies are:

Along a period, electron gain enthalpy becomes more and more negative while on moving down the group, it become less negative.

Halogen have maximum value of ∆Heg with in a period due to smallest atomic size.

Elements having half-filled and fully-filled orbitals exhibit more stability. Therefore, electron gain enthalpy will be low for such elements.

Electron gain enthalpy can be measured by Born-Haber cycle and elements with high ∆Heg are good oxidising agent.

It is defined as the tendency of an atom to attract the shared electron pair towards itself in a covalent bond. Various factors with which electronegativity varies are:

For noble gases, its value is taken as zero.

Electronegativity helps to predict the polarity of bonds and dipole moment of molecules.

Electronegativity order of some elements (on pauling scale) is

The difference in electronegativity of two atoms A and B is given by the relationship.

(∆ is known as resonance energy.) 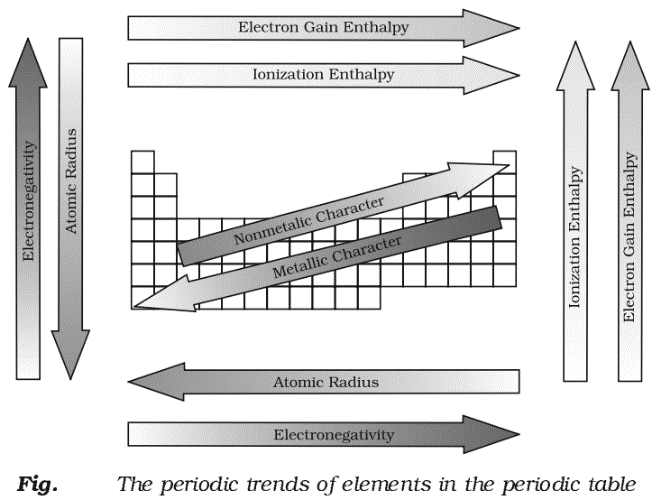