A potentiometer is a device used to measure an unknown emf or potential difference accurately.

This is a versatile instrument. It is basically a long piece of uniform wire, sometimes a few meters in length across which a standard cell is connected. In actual design, the wire is sometimes cut in several pieces placed side by side and connected at the ends by thick metal strip..

A current I flows through the wire which can be varied by a variable resistance (rheostat, R) in the circuit. Since the wire is uniform, the potential difference between A and any point at a distance l from A is

where ϕ is the potential drop per unit length. 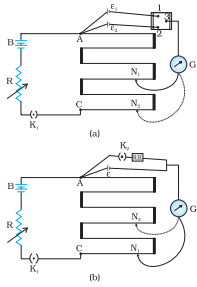 Fig. A potentiometer. G is a galvanometer and R a variable resistance (rheostat). 1, 2, 3 are terminals of a two way key
(a) circuit for comparing emfs of two cells; (b) circuit for determining internal resistance of a cell.

Some Important point about Potentiometer:

Other uses of a potentiometer: Any physical quantity that can produce or control a potential difference can be measured using a potentiometer. Thus, a potentiometer can be used to measure and control stress, temperature, radiation, ph, frequency, etc.

Units: The emfs are in Volt, length of potentiometer wire in meter.