Some Commonly observed phenomenon due to Refraction

Refraction through a Rectangular Glass Slab 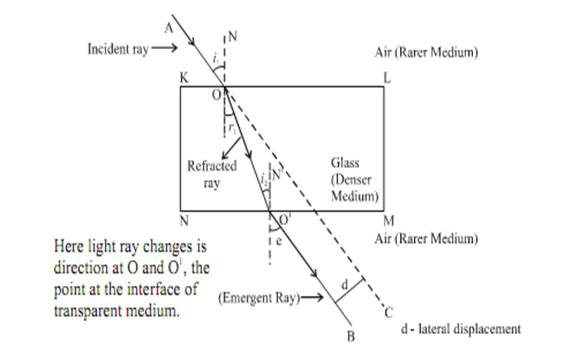 When an incident ray of light AO passes from a rarer medium (air) to a denser medium (glass) at a point O interface on KL, it will bend towards the normal. At point O1, on interface NM the light ray entered from the denser medium(glass) to rarer medium (air) here the light ray will bend away from normal OO1 is a refracted ray OB is an emergent ray. If the incident ray is extended to C, we will observe that emergent ray O1B I parallel to the incident ray. The ray will slightly displaced laterally after refraction.

Note : When a ray of light is incident normally to the interface of two media it will go straight, without any deviation.

Laws of Refraction of Light

For given colour and pair of media, this law is also known as Snell’s Law 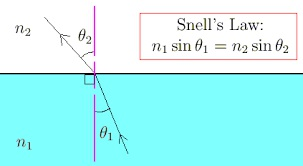 A transparent material bound by two surfaces, of which one or both surfaces are spherical, forms a lens.

A lens bounded by two spherical surfaces, curved inwards is known asdouble concave lens (or simply concave lens). It is also known as a diverging lens because it diverges the light.

Convex lens, converge to the point on the principal axis, denoted by F, known as Principal focus

Concave lens, appear to diverge from a point on the principal axis known as principal focus.

The distance OF2 and OF1 is called as the focal length.

Tips for Draw among Ray Diagram 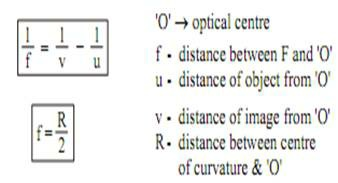 The degree of convergence or divergence of light ray achieved by a lenses known as the power of a lens. It is defined as the reciprocal of its focal length Represented by P.