Human body has about 65% and some plants have nearly 95% water.

Water is the most abundant and widely distributed on the earth. it occurs in all the three physical states. H2o is a covalent molecule in which oxygen is sp3 hybridised. It has bent structure. 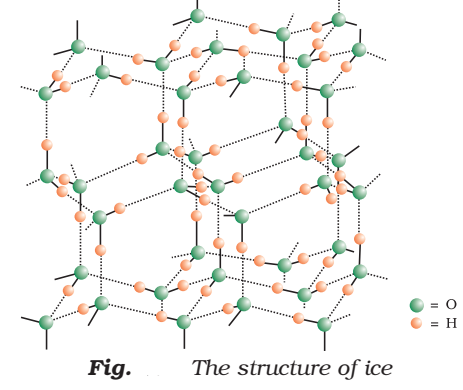 It behaves like an amphoteric substance because it can act as an acid as well as base.

Autoprotolysis of water also accounts for its amphoteric nature according to Bronsted-Lowry concept.

pH of water is 7. And it is neutral towards pH.

Water can act as an oxidising as well as reducing agent.

As an oxidising agent:

It has a very strong hydrating tendency. It can hydrolyse a large number of compounds such as oxides, halides, carbides etc.

From aqueous solutions many salts can be crystallised as hydrated salts. Hydrates are of three types:

Water which does not produce lather with soap easily is called hard water. Presence of calcium and magnesium salts in the form of hydrogen carbonate, chloride and sulphate in water makes the water hard.

Types of Hardness of Water

It is due to the presence of bicarbonates of calcium and magnesium in water.

It can be achieved:

It is due to the presence of chlorides and sulphates of calcium and magnesium.

Permutit when fully exhausted can be regenerated by treating with 10% solution of sodium chloride. It is most efficient method to gel water with zero degree of hardness.