H2O2 was discovered by J.L. Thenard in 1818. It is an important compound used in pollution control treatment of domestic and industrial effluents.

Electrolysis of a cold 50% solution of H2SO4 at high current density in an electrolytic cell using pe as anode and graphite as cathode.

peroxodisulphuric acid formed around anode is withdrawn and then distilled with water under reduced pressure.

Hydrogen peroxide has a non-planar structure. The molecular dimensions in the gas phase and solid phase are shown in fig. 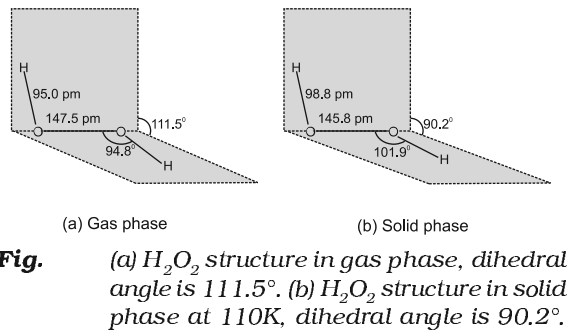 It is stored in the presence of traces of alcohol, acetanilide or sodium pyrophosphate which slow down the rate of decomposition of hydrogen peroxide.

It acts as a strong oxidising agent in acidic as well as in basic medium.

Its bleaching action is due to oxidation by atomic oxygen and permanent.