Note: This model is applicable to H-atom or H-like species like He+, Li2+, Be3+.

The energy of an electron is given by: 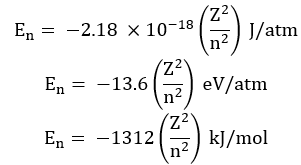 Thus, energies of various levels are in the order:

The energy of the lowest state (n=1) is called ground state.

Radii of the stationary states:

Velocities of the electron in different orbit:

Limitations of Bohr’s model of the atom: