where p is the linear momentum of a particle.

It states that it is impossible to determine simultaneously, the exact position and exact momentum (or velocity) of an electron.

Mathematically, it can be given as in equation, 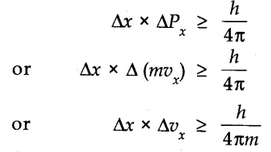 The significance of Uncertainty Principle