Dobereiner classified the elements into groups of three elements with similar properties in such a manner so that the atomic weight of the middle element was the arithmetic mean of the order two, e.g.,

The triads given by Dobereiner were helpful in grouping some elements with similar characteristics together, but he could not arrange all the elements known at that time into triads.

Newland states that when elements are arranged in order of increasing atomic masses, every eighth element has properties similar to the first just like in the musical not (Every eighth musical not 1S the same as the first-mentioned note). This can be illustrated as given below:

Limitation of Newland’s Law of Octaves

Meyer presented the classification of elements in the form of a curve between atomic volume and atomic masses and state that the properties of the elements are the periodic function of their atomic volumes.

He concludes that the elements with similar properties occupy a similar position in the curve.

Mendeleev’s Periodic Table is based upon Mendeleev’s periodic law which states “The physical and chemical properties of the elements are a periodic function of their atomic masses.”

At the time of Mendeleev, only 63 elements were known.

Few important achievements of the Periodic Table are 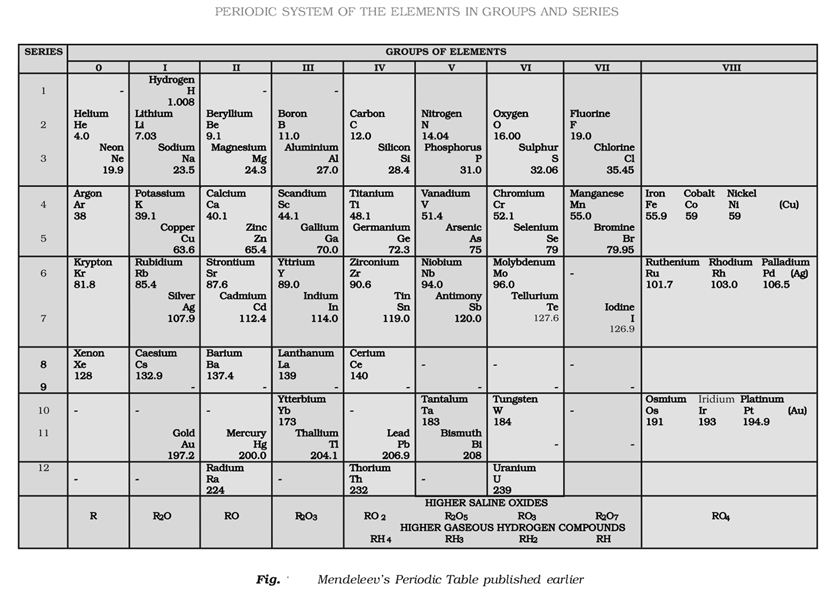 Defects in the Mendeleev’s Periodic table