Physical process involves such changes, which only affects the physical properties of the substance undergoing changes but have no effect on the chemical composition and properties.

The equilibrium is represented as

Rate of melting of ice = Rate of freezing of water.
The system here is in dynamic equilibriums and following can be inferred.

The equilibrium can be represented as

Rate of evaporation = Rate of condensation
When there is an equilibrium between liquid and vapours, it is called liquid-vapour equilibrium.

This type of equilibrium is attained where solids sublime to vapour phase. For example, when solid iodine is placed in a closed vessel, violet vapours start appearing in the vessel whose intensity increases with time and ultimately, it becomes constant.

The equilibrium may be represented as

Chemical processes involve changes in chemical composition and properties. Whenever a chemical change occurs, we can say that a chemical reaction has taken place.

The dynamic nature of chemical equilibrium can be demonstrated in the synthesis of ammonia by Haber’s process. Haber started his experiment with the known amounts of N2 and H2 at high temperature and pressure. At regular intervals of time he determined the amount of ammonia present. He also found out concentration of unreacted N2 and H2.
After a certain time he found that the composition of mixture remains the same even though some of the reactants are still present. This constancy indicates the attainment of equilibrium. In general, for a reversible reaction the chemical equilibria can be shown by

After a certain time, the two reactions occur at the same rate and the system reaches a state of equilibrium. This can be shown by the given figure. 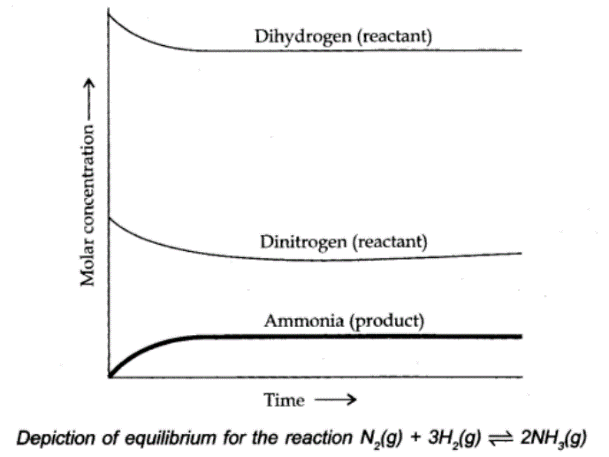 In other word a reaction which takes place not only in the forward direction but also in the backward direction under the same conditions is called a reversible reaction.

A reversible reaction between A and B to form C and D is represented as:

If a reaction cannot take place in the reverse direction, i.e., the products formed do not react to give back the reactants under the same conditions, it is called an irreversible reaction.