It is prepared by direct oxidation of C in limited supply of oxygen.

On small scale it is prepared by dehydration of formic acid with Con. H2SO4 at 373K.

It is prepared by complete combustion of carbon and carbon containing fuels in excess of air.

Silicon dioxide, commonly known as silica, occurs in various crystallographic forms.
For example, Quartz, Cristobalite and thermite are some of the crystalline forms of silica.

The linear, cyclic or cross-linked polymeric compounds containing (R2SIO) as a repeating unit, are known as silicones. They are manufactured from alkyl substituted chlorosilanes. 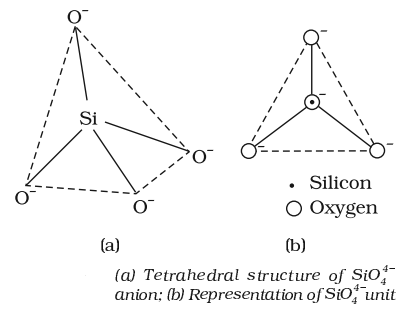