Let us now discuss the various conversion factors to solve stoichiometric problems. We have to follow a few steps for the same. They are:

Stoichiometric Calculations are Based on Chemical Formulas

It is the sum of the atomic weights of the various atoms present in the molecule of the substance. For example, we can calculate the formula mass of Na2S as 2(23) + 1(32) = 78

Avogadro’s number is the total number of particles present in one mole of a substance. It is the number of atoms present in exactly 12g of C-12. Avogadro number is valued as 6.022 × 1023.

It is the sum of the total mass of all the atoms that constitute a molecule per mole.

Let us consider the combustion of methane. A balanced equation for this reaction is as given below:

From these relationships, the given data can be interconverted as follows

This reagent enters the picture when the reaction involves two or more reactants. For solving any such reactions, the first step is to calculate the limiting reagent.

When the reactions are carried out in solutions, the amount of substance present in its given volume can be expressed in any of the following ways:

It is obtained by using the following relation: 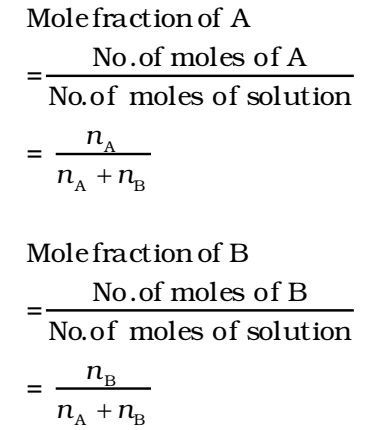 The sum of the mole fractions of the components is equal to 1.

It is defined as the number of moles of solute in 1 litre of the solution. It is denoted by the symbol M.

In terms of weight, the molarity of the substance can be expressed as: