Fig. Orbital picture of ethene showing formation of (a) π-bond, (b) π-cloud and (c) bond angles
and bond length

Preparation of Alkene from Alkynes

Preparation of Alkene from Haloalkanes (dehydrohalogenation)

Preparation of Alkene from Dihaloalkanes (dehalogenation)

Preparation of Alkene from Alcohols (dehydration) 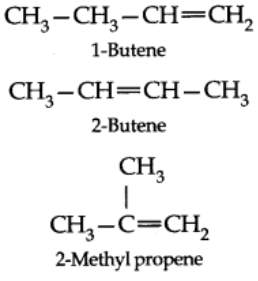 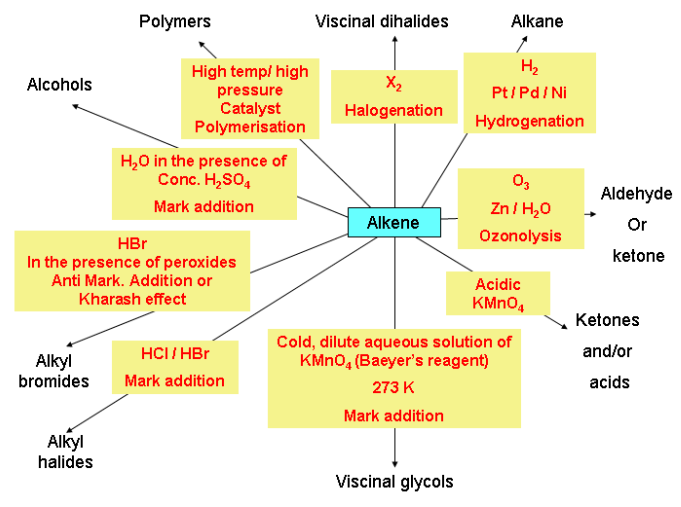 Addition of halogens (Cl2 or Br2)

Addition of bromine is used as a test for detecting the presence of a carbon-carbon double bond or triple bond.

The order of reactivity among hydrogen halides is

In case of unsymmetrical alkenes addition occurs according to Markonikov’s rule. This reaction takes place through an ionic mechanism. Electrophilic addition to a carbon–carbon double bond involves the formation of an intermediate, i.e. more stable carbocation.

Negative paet of the addendum (adding molecule) gets attached to that carbon atom which possesses lesser number of hydrogen atoms. e.g.,

In 1933 Kharasch and Mayo observed that when HBr is added to an unsymmetrical double bond in the presence of organic peroxide, the reaction take places opposite to the Markovnikov rule. 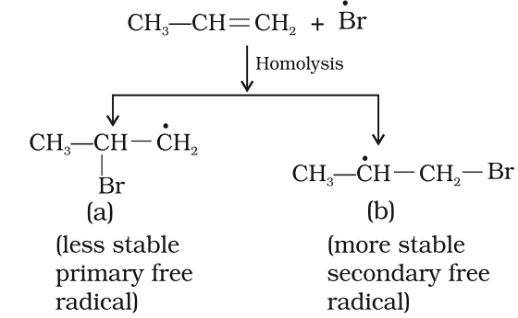 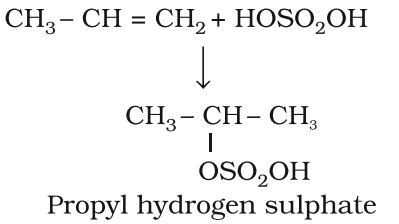 Alkenes decolourise cold dilute aqueous solution of potassium permanganate (Baeyer’s reagent). It is used as a test for unsaturation.

Acidic KMnO4 or acidic K2Cr2O7 oxidise alkenes to ketones and/or acids depending upon the nature of alkene and the experimental conditions.

Alkenes involves the addition of ozone molecule to alkene to form ozonide, and then cleavage of the ozonide by Zn-H2O to smaller molecules